8 or 9 large Russet potatoes (when I made this, I used 6 and whilst good was a little thinner than I prefer)

1 32 fluid ounce box of beef broth
1 32 ounce of vegetable broth (I like to use both a meat and a veg when cooking. It makes the dish more flavorful than just using on type of broth)
3 bacon strips was all I had, but you can use as much as you prefer
1 large onion diced
About 1 tablespoon of diced garlic
2 cups of milk or 1 cup if you're using whole milk or cream
About 1/4 cup of chopped chives 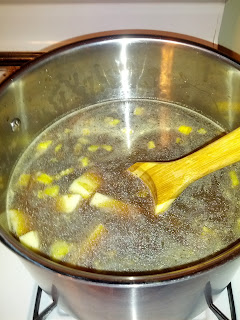 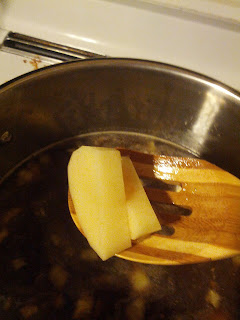 In a skillet fry up the bacon. Once bacon is done, lower the heat to low and add the diced onion and garlic to the bacon grease. Sprinkle some salt and let caramelize. Stir often for about 15 minutes. They should be soft and not fried. In a large pot, add the diced potatoes and cover with broth, salt and pepper, caramelized onions and garlic. Let the broth and potato mixture come to a boil then lower heat to a simmer. It should take about 45 minutes for the potatoes to be soft, but sometimes I like to let it simmer for a couple hours because it makes the flavor even better. I like to use a masher because I prefer a bit of a chunkier soup, but if you prefer smoother soup use a blender (immersion blenders are fab). Add the milk and let it simmer for about 15 more minutes. Just before serving add the crumbled bacon and chives to the soup. Doing this will insure they don't get soggy. Enjoy!

The nice thing about this soup is that the bacon adds a lovely smokiness and the chives add a nice brightness. It lasts for a few days and tastes even better a day or two later. 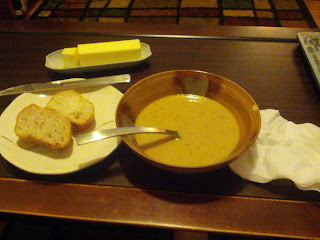 Posted by RogueKitten at 2:59 PM